When the Christmas season rolls around, Germany comes to mind. I think this is due to the visual influence of medieval architecture on so many of the villages and ideas we associate with Christmas, with the German carol ‘Stille Nacht’ (one of the few carols you often hear in a different language), and, of course, the strong associations of snow and pine trees.  Germany is also the birthplace of the Christmas tree. 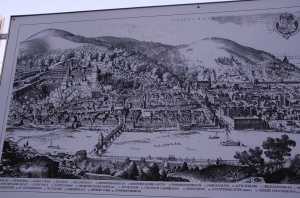 17th century version of the map of Heidelberg

One of my favorite German cities is Heidelberg, a university town on the Neckar river in south-eastern Germany.  People have been living there for hundreds of thousands of years, as evidenced by the jawbone of “Heidelberg Man” found nearby in 1907. It was established as a town by the Romans, who were subsequently chased off by the Germanic hill tribes in the third century AD. 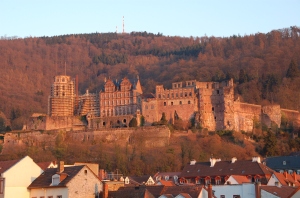 View of Heidelberg Castle from across the river

I first went there as a child on a trip with my parents, and fell in love with the castle that dominates the city.  An intimidating red stone structure at the top of the hill, it must be one of the most beautiful ruins in Europe–but parts of it have been restored, and now house, among other things, an apothecary museum and an extremely large wine cask or “tun.” 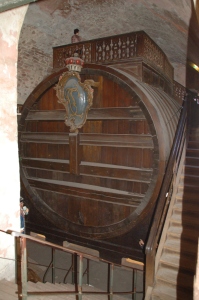 the giant tun, with a capacity around 57,000 gallons

So much historical character remains in the streets and buildings, that it is like stepping back in time.  You will not be surprised to find that Heidelberg is one of the key settings in the next Dark Apostle book, Elisha Mancer. 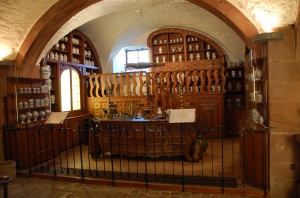 In addition to the outstanding castle, Heidelberg contains striking bridges, and the austerely magnificent Church of the Holy Ghost, which was under construction during Elisha’s time, the 1340’s.  Heidelberg was also, at that time, home to a thriving Jewish community, and later served as a refuge during the persecutions that accompanied the Black Death.

Church of the Holy Spirit

I spend as much time in my office as I possibly can--thinking up terrible things to do to people who don't exist.
View all posts by E. C. Ambrose →
This entry was posted in Elisha Mancer, Germany, history, medieval, Settings, Uncategorized and tagged Elisha Mancer, German castles, Heidelberg, Heidelberg castle. Bookmark the permalink.