Yes, it’s finally here–the day I can share the amazing new cover art, by Cliff Nielsen, for Elisha Mancer, book 4 in my Dark Apostle series.  This volume takes Elisha to the Continent to track down his enemies before they can undermine the Holy Roman Empire, and the Holy Church itself! 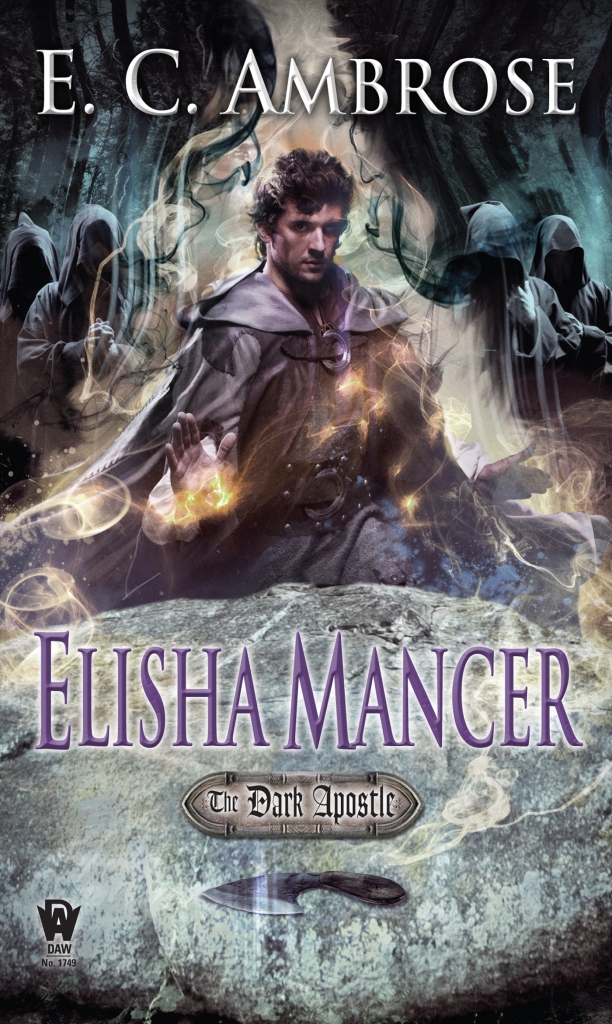 Autumn, 1347. . .terror stalks Europe as necromancers conspire to topple kings, corrupt an empire and undermine the Holy Church itself.

Armed with a healer’s skill and a witch’s art, Elisha hurries to the Continent to warn the Holy Roman Emperor and discover how to stop the mancers’ plans.  But his enemies lurk in markets and churches, abducting innocents to torture and kill, using these slayings to open a passage through the Valley of the Shadow of Death.  If he fights for a single life, Elisha may well become the next victim.  With his affinity for both life and death, Elisha is by turns claimed for a savior, or for one of the very enemy he faces.

When he uncovers a scheme to lure thousands of pilgrims to Rome, Elisha’s hunt takes him from the opulent empire to the ruined Eternal City:  abandoned by the Pope, shattered by baronial squabbles, and now ruled by a madman.  At least, on the surface above. In the catacombs lurks an entirely different sort of leader, a master of death more powerful than Elisha himself.

A one-eyed priest, a seductive traitor, a stern rabbi, a merchant of bones—how can he tell friend from foe when he no longer recognizes himself? Every blow Elisha strikes draws him toward the wrong side of the battle.   When the enemy retaliates in blood, he fights to keep his humanity lest he be consumed by the spreading darkness and become. . .Elisha Mancer

Elisha Mancer launches on February 7, 2017, and will be available wherever books are sold.  You can pre-order now, on Amazon, Barnes and Noble, or through your local independent book store!

I spend as much time in my office as I possibly can--thinking up terrible things to do to people who don't exist.
View all posts by E. C. Ambrose →
This entry was posted in books, Elisha Mancer, fantasy, fiction, magic, medieval, publishing, The Dark Apostle and tagged 2017 novels, book release, E. C. Ambrose, Elisha Mancer, necromancers, new fantasy. Bookmark the permalink.