A few of my recent posts have focused on settings I visited and researched for my work–definitely one of the perks!  But it may seem as if I am a bit obsessive about my settings.  That’s because setting is one of the defining features of fiction–and especially of fantasy. 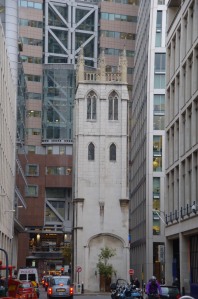 The Lost Tower of London:  a lovely little place, with a high-contrast setting.

We tend to think of a setting as the backdrop for the action that takes place there, but setting can have a great influence on many other aspects of fiction–even if you don’t subscribe to the “setting as a character” school of thought (which I don’t).  Setting creates resonance with the themes and emotional beats of the work. It can contribute to or inspire plot points.  And it shapes the characters who live, work, and pass through it.

Think about a certain famous work beginning this way:

In a walk-up, in the Bronx, there lived a hobbit.

Even if you wanted to tell the same basic story, it is now completely different.  And so is he.  Who would Bilbo have become if he grew up, not only outside the Shire, but above ground?  If you wanted to re-create the same cozy feeling and small-community sensibility that Bagend exemplifies, you’d be working with very different social cues and signifiers in the description and in how people react to it.

It’s so easy to default to the familiar. In fantasy fiction, we’ve even developed a term–  Consensus Fantasy Setting–which denotes a very recognizable pastiche of medieval life and architecture, with lots of half-timbered houses and people who eat stew when they take a break from riding their horses though a spooky forest of identical spooky trees.  Here it is: 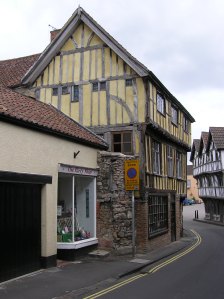 This narrow Medieval street from a town in Dorset gives a sense for the architecture and feel of 14th century London. 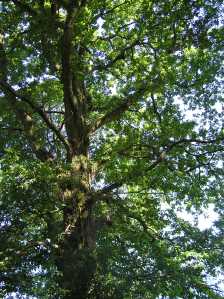 trees in the New Forest

Yep, there are actually places like this–these ones are in England–and I think it is no coincidence that many American authors go straight for these images when they begin to write.  That place on the left?  That’s the inn where the travelers meet up for their adventure, before they ride through the forest. . .  I guess I cheated. Because my series is set in 14th century England, I actually used these settings.  I hope I brought them to life, not merely as a stage set given to me by a previous generation of writers, but rather, by studying, researching, and visiting them when possible, to look for the details that reveal the specific place and time.  The New Forest, for instance, is actually a palimpsest of continuous human occupation since the Bronze Age or before, a fact that shaped the characters’ lives and the things they see when they enter.

But the idea of stage setting can be a useful one.  In the movies, you choose a location and film there.  In a book, as on stage, you need to bring everything the audience will experience–whatever they see, hear, smell (aside from the things each member of the audience brings on their own).  So crafting a setting in fiction is the result of a series of deliberate choices about what details will most reveal the place–and also the people who move through it.  Different characters might enter the same setting and notice very different things, having unique reactions as a result.

The right setting for a given scene can elevate the work to a new level, by bringing out that history, the characters’ reactions to it, and the emotional tone of the work. I have recently been studying both George R. R. Martin, and Martin Cruz Smith, thinking about how they achieve the effects that they do. They have a startling number of things in common.  One of them is the effective use of setting.  It’s handy if you have the option of inventing settings, as GRRM does, then you can build in the resonance that you want–like putting eyes on trees in the Godwood, and being very careful about how those places are described.  If you are using real places, as Cruz Smith does, or as I did for The Dark Apostle, then you look for the places that give you a thrill–and will hopefully do the same for your characters and your readers.  I often start with a map in great detail, and look for something striking, or thematically relevant to the scene.

Does that mean you can’t set a deeply resonant and exciting work in an ordinary American town?  Of course not–it means that you need to look more deeply into that place and consider what you find there, and that you may find unexpected things.  The town where I used to live was build in a river valley, with many buildings set into the slope, so the library had a short stone bridge to reach the front door.  Beneath the bridge, a space closed off by a metal grate, chained and locked–a low stone chamber.  Everyone in town probably knows about this spot, and most of them shrug it off.  But my murderer might use it to stash a body–or my teen wizards might use it as their hide-out.

A secret room beneath the library steps? Yes!  In an ordinary town, an extraordinary setting–and thereby hangs a tale. . .

I spend as much time in my office as I possibly can--thinking up terrible things to do to people who don't exist.
View all posts by E. C. Ambrose →
This entry was posted in research, Settings, writing, writing process and tagged fantasy, fantasy settings, fantasy writing, fiction, setting, writing about places, writing fiction. Bookmark the permalink.