Thanks to a clever octopus in New Zealand who escaped back to the sea, there’s been a lot of talk lately about animal intelligence.  A recent book by Frans de Waal  questions whether we are even smart enough to know if animals are intelligent.

Years ago, I had the chance to do a behind-the-scenes tour at the New England Aquarium in Boston, and heard the mystery of the disappearing fish.  It seems that one of the tanks had fewer fish every morning–and they finally figured out that an octopus down the row was slipping out at night and helping himself, then going back home again.  A board placed over the top of his tank stopped that problem.  So the adventure of Inky the octopus was not surprising, merely the culmination of a series of incidents involving cephalopods on the move. 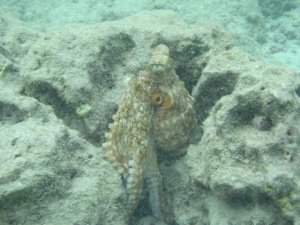 an octopus off of Hawaii

As a writer of fantasy and science fiction, I am often in the position of considering non-human intelligence, whether that is the intelligence of the working wolf-pack, of a mythical creature, or of an alien species on another planet.  How would it manifest?  What evidence would we look for, or be able to recognize? Science fiction is rife with tales of mistaken identity, wherein the intrepid humans fail to see the intelligence of the creatures they encounter, whether those are giant termites, as in The Termite Queen, or adorable miniatures, as in the Fuzzy books.  Our own assumptions about what constitutes intelligence or culture stand in the way, in spite of our apparent eagerness to learn and openness to new ideas.

Tool use and communication, as well as an ability to organize group activity are usually considered key to intelligence.  Crows use tools, and learn from watching each other.  Dolphins, and even prairie dogs, communicate and coordinate their activities.  Centuries ago, European explorers had the bad habit of considering everyone they encountered who lived in a different way from themselves as savages.  (Interestingly, one account of the rumor of gorillas refers to them as simply another tribe of people).  In our continued arrogance, are we doing the same thing to many species today–denigrating their innate intelligence in order to advance our own agenda and justify treating them as “mere” animals?

I think this is often the overt or subtextual meaning of those science fiction stories that depict wildly different races and the efforts of humanity to get along with them. Ashleigh Brilliant, the creator of Potshots, may have said it best:  All I want is to be treated like everyone else, no matter how revoltingly different I am.

What does it take to define intelligence?  Once having done so, how do you decide where, upon the scale of sentience, to place the dividing line between animals we eat, animals who are our companions, and animals who are, perhaps, our cousins if not our equals?

Creating scenarios and playing them out in fiction is one way to grapple with these questions. It’s gratifying to see some of that conversation entering the mainstream, thanks to Inky and other animal ambassadors.  It can be hard in a fictional context to create a truly alien intelligence–beings who think and act very differently from us–which is why many authors draw from examples in the animal kingdom to inspire new races in other places or on other worlds.  This often begins with a series of what-if questions.  What if a particular behavior in ants signifies their true culture?  What would spur the development of advanced skills in a certain species, or the development of an intelligent species in a particular environment?

Now, it seems, we should be scrutinizing these questions more closely. . .what if our extrapolations are not so far from the truth?  Another of the recent videos that questions our assumptions about intelligence features a dolphin who apparently sought out a diver to help it with an injury that required hands to undo.  Fiction, science fiction, animals, aliens.  They are already here, and we are starting to take notice.

I spend as much time in my office as I possibly can--thinking up terrible things to do to people who don't exist.
View all posts by E. C. Ambrose →
This entry was posted in essays, fantasy, science fiction, worldbuilding and tagged alien intelligence, aliens, animal intelligence, cephalopod, dolphin, octopus, science fiction, Termite Queen. Bookmark the permalink.