I’ve mentioned Aachen in a couple of recent blog posts, and I figure it’s time this beautiful city got its own entry although, alas, it will not appear in my book.

I had the opportunity to visit a couple of years ago on a research jaunt aimed at making my series “more epic,” ie, wider in scope and scale, by expanding beyond England, and in the final two volumes you’ll see the result of that effort (and hopefully love it). 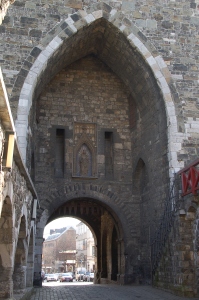 Aachen is the westernmost city in Germany, sharing a border with Belgium and the Netherlands, on the Rhine river. If you have the chance to go, I highly recommend taking a river cruise or taking the train to get there.  The entire length of the Rhine is studded with spectacular castles.

Charlemagne visited for the first time in 768, after his coronation as King of the Franks, and began spending all of his winters there (his down-time between seasons of war or or official travel), making it the center of his court.  While he does not appear to have added much to the fabric of the city, he did build his Palatine Chapel (now the cathedral), a sumptuously decorated central plan church, which houses his striking throne.

The striking part is, of course, how plain it looks: made of just a few slabs of white marble, with wooden doors to cubbies underneath.  But this throne has its own story.  Those slabs of marble and the steps leading up to them were taken from the Church of the Holy Sepulcher in Jerusalem.  And the cubbies underneath?  During the coronation, the jeweled and gilded Purse of St. Stephen would be placed inside.  This holy relic enclosed dirt from the place where St. Stephen was martyred.  So when a king of Germany sat here, he was symbolically seated in Jerusalem, the center of the world.  Charlemagne had already been crowned, but the throne still held a great deal of significance.

In the nearby city hall, you can take a marvelous audio tour, which includes a nifty interactive component that makes you a witness to the coronation of a later king, with commentary by everyone from merchants to servants to nobles who might have been present at the event.  I was a little irked that, in the audio tour, they did not fully explain the imperial regalia, replicas of which occupy a nice glass case.  You can see a version of the Purse of St. Stephen here, along with the Iron Crown (which contained a nail from the Crucifixion–okay, one of many nails made from a nail that theoretically came from the Crucifixion)  and Charlemagne’s sword. However, the audio does not explain the significance of these artifact/relics, nor does it even mention the lance: said to contain a fragment of the very lance that pierced the side of Christ.

the Purse of St. Stephen, with the Holy Lance

In Aachen, the enthusiast for medieval history can thus discover how the secular powers sought to claim the imprimatur of the heavenly power with every bit of stone and soil.

I spend as much time in my office as I possibly can--thinking up terrible things to do to people who don't exist.
View all posts by E. C. Ambrose →
This entry was posted in Deleted scenes and settings, history, medieval, relics, religion, research and tagged Aachen, charlemagne, Holy Lance, medieval research, Purse of St. Stephen, relics, Saint Stephen, throne of charlemagne. Bookmark the permalink.

2 Responses to Unused Settings: Aachen, the Imperial City of Germany