The Two Emperors: part I, Louis the Bavarian, the Man who Named his own Pope

During the period when the Dark Apostle novels are set, much of central Europe was consolidated as the Holy Roman Empire (which the wags are fond of pointing out was neither holy, nor Roman, nor an Empire–all valid points, but a bit outside my purview).  The post of emperor was voted on by a group of electors, primarily noble land-holders, but also a few bishops, but the 14th century was marked by the unusual overlap of two different elected emperors–one of whom refused to leave office.  This profile will focus on Louis IV, called “the Bavarian” while my next takes a look at his rival, Charles IV. 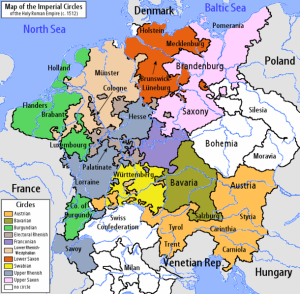 Louis, the hereditary duke of Upper Bavaria (b. 1282), inherited several other titles on the deaths of various relatives, leaving him King of the Romans, Duke of Bavaria and King of Italy.  Louis reign as emperor sort of began in 1314, but he’d been elected by only one faction of the electors, with the others supporting, Frederick, the son of a former emperor.  Both men quickly had themselves crowned (Louis at the customary seat in Aachen, where Charlemagne had his throne) but not by the customary archbishop, leading to several years of war.

Louis eventually prevailed, taking his rival prisoner, and only releasing him under pressure from the Pope, and with the promise that Louis was proclaimed the rightful emperor (HRE).  Frederick so impressed Louis with his chivalry and honor, that Louis offered to reign jointly with him, an arrangement that the other electors vetoed, leaving Frederick as a subsidiary king, and apparently satisfied.

But Louis and the Pope never fully mended their relationship.  At the time, these were the two most powerful roles in all of Europe, and Pope John XXII never fully accepted the legitimacy of Louis coronation.  To truly claim the throne of the empire, Louis should be crowned in Rome–but Rome was kind of a mess at the time.  As tension mounted between the HRE and the Pope, the pope finally excommunicated the emperor in 1324, a punishment that had often brought an emperor to heel in the past.  John had apparently reckoned without the Louis’s forceful personality.

Louis won through to Rome, where he cowed the clergy, and had himself crowned by one of the senators, after which he declared the Pope a heretic, and set about getting himself a new pope, a spiritual Franciscan who ruled as Nicholas IV, but both of them were forced to leave Rome, along with a collection of other rebel clergy, including the Englishman William of Ockham (of razor fame).    The power brokering of the time forged and dissolved various alliances, usually aimed at limiting the power of the French, who controlled Avignon where the pope then lived–not Louis’ pope, but the legitimate one.   Louis’s desire for greater power, land and influence eventually lead him to renounce his own pope and angle for reconciliation.

Unfortunately, Louis’ scheming and land-grabs had antagonized even the nobles who once supported him, and his excommunication meant that, as good Christians, they weren’t even supposed to have contact with him.  Thus, in 1346, the electors gathered and elected a second emperor, Charles IV. Only Louis’ untimely death in 1348 broke the ensuing civil war.

By all accounts, the two emperors could not have been more different.  Louis was older, and, as you may gather from his offending almost everyone, not easy to get along with.  Louis married twice, and sired sixteen children including a girl named Anna, who in the real history died young.  For the purposes of my own book, I have allowed her to survive her childhood and marry the fictional prince Thomas of England–another of those political matches the medieval nobility were known for.  Next week–let’s talk about Charles, the emperor who won!

I spend as much time in my office as I possibly can--thinking up terrible things to do to people who don't exist.
View all posts by E. C. Ambrose →
This entry was posted in Great Characters of the Middle Ages, history, medieval, religion, research, The Dark Apostle and tagged 1347, Charles IV, Holy Roman Empire, Louis the Bavarian, Medieval Germany, medieval history. Bookmark the permalink.

4 Responses to The Two Emperors: part I, Louis the Bavarian, the Man who Named his own Pope