Here in beautiful (aside from the weather) Kalamazoo, the 50th International Congress on Medieval Studies is, sadly, coming to a close.  Most of the conventions I attend are science fiction and fantasy fan events, like the World Science Fiction or World Fantasy conventions, where I enjoy talking to other writers, meeting fans and participating in the conversations of our genres.

Kalamazoo is a completely different animal (now I am picturing something from a medieval bestiary):  an academic conference which brings together thousands of medievalists from around the world. It is also an amazing place to re-fill the well of my inspiration as a writer.  I listened to papers about the Mongol invasion, and about monstrous babies in the romances of the time. I was sorry the session on Outlaws was cancelled, except that it freed me up to attend a session on astronomical predictions like the conjunction of 1345, later claimed to have presaged the plague. 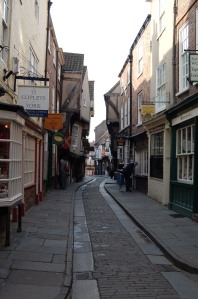 one of the marvelous medieval streets in York, England

I attended a segment of the York Passion Play, performed in Middle English, which always takes me back to an earlier time.  This, I imagine is what Elisha and his friends really sounded like–the language is difficult to read, but hearing it aloud brings out the roots of words and their pronunciations.  This kind of event also creates a sense of communal presence and engagement in entertainment that is lacking in many forms of entertainment, with few boundaries between viewer and performer.  The performers, like the performers of the Middle Ages, were drawn from the attendees of the Congress, our fellows, and I noticed both Jesus and Satan, and some of their respective followers, in plainclothes at other places around the Congress.  The citizens of York would have had a similar experience, seeing their friends and neighbors portraying various roles, with a different Jesus in each of the segments as they moved around town.

Later, after revealing my interest in period medicine, I was drafted to patch up Sir Kay during the annual Malory performance, another highlight, and an interesting linguistic contrast with the earlier pronunciation of the York Passion Play.

The day also held a certain sense of affirmation, beginning with plenary speaker Richard Utz presenting a sort of call to action for medievalists to re-invest in the world (which included references to the Society for Creative Anachronism, which at K-zoo in the past has been a bit of a secret society to which one did not readily admit belonging).  Then came a lunchtime panel with a group of historical novelists.  Someone asked, rather timorously, if they wrote fantasy–expecting to be laughed out of the room.  But several of the authors proudly stated that they did, and one, Lucy Pick, whose first novel, Pilgrimage, is now out, said something especially apt:  the stories they {i. e., the medieval people} tell about themselves contain the fantastic.

And so, thankfully, does Kalamazoo.  If you are a medieval enthusiast, even if not a professional in the field, I highly encourage you to attend, and to leave all the richer with the treasures of knowledge so generously shared.

I spend as much time in my office as I possibly can--thinking up terrible things to do to people who don't exist.
View all posts by E. C. Ambrose →
This entry was posted in conventions, fantasy, history, medieval and tagged International Medieval Congress, k-zoo, Kalamazoo, medieval convention, Middle English performance. Bookmark the permalink.

1 Response to Greetings from Kalamazoo!