I’m starting to see a series here on the blog about my thoughts on the world-building of various new films. Today’s subject is “Frozen,” a fun and surprisingly anti-Disney-trope Disney film. Not being real big on princesses, I wasn’t sure how I’d feel about this one, but it undermines a lot of the stuff that Disney Princess films are supposed to be all about, mainly that the love of a man and a woman is the only thing that makes the world go ’round. 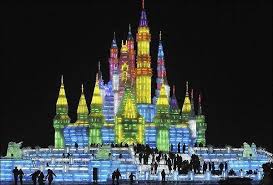 In this case, the characters’ problems, and their solutions, come from within. It’s not the fear of some faceless mob that threatens Elsa–it is her own fear of herself. Likewise, it’s not the sacrifice of some other person that saves Anna, it is her willingness to sacrifice herself.

Okay, E. C., you liked the movie, so why are we here? We’re here for Kristoff. Kristoff, the reindeer-loving local boy, gets kinda short shrift in this film. Yes, he’s helpful in getting to the mountain to find Elsa, and yes, he brings Anna to the right people to help her out, then hurries her all the way home to her (presumed) savior. It’s a noble and a beautiful thing–though he doesn’t even get to be the one who saves the day. But there’s one aspect of Kristoff that gets neglected. He’s an ice merchant.

We first meet him as a small child at the feet of a group of men who are harvesting ice from mountain ponds to deliver to those in warmer climes. (As an aside, I am still fascinated by the idea that the same thing was done here in New England, where ice was harvested from local ponds and shipped, packed in straw to insulate it, all the way to India so the British could have cold drinks. But that’s another blog for another day.) Kristoff grows up surrounded by snow and ice, learning about it from his culture and from his labor, gaining the knowledge to work with it safely.

When he arrives at Elsa’s ice palace, he’s clearly impressed. So are we, but for the non-ice-initiated, it’s basically just a pretty (and cold) piece of architecture. At this point, Kristoff even tells us, “I know ice.” But what, exactly, does he know about it? We already know that his livelihood is in the tank–he’s an ice merchant during an eternal winter–so the conflict in the film is personal. From a narrative perspective, that’s great. It raises the stakes and gives him a personal investment in the solution, and it gives the viewer a rooting interest in him. Woo-hoo.

Unfortunately, that’s the last we ever hear of Kristoff’s ice-knowledge. Given the advertising images of the film which clearly suggest a relationship between Kristoff (ice merchant!) and Elsa (ice maker!) I suspect that his attachment to ice is there mainly as a red herring to throw the viewer off about where the story is going, and who will turn out to be a hero in the end.

Perhaps they wanted to throw in that little twist, making us believe that Kristoff and Elsa were perfect for each other until we find out the truth, but I am still a bit disappointed that Kristoff’s skill with ice is never plot-relevant. They’re living, for a while, in a world dominated by ice, yet he never comes through with any special insight. A way to attack the ice and snow beast? A safe route across the broken ice flows? A glimpse into the ice of Anna’s heart that helps him know what to do? Given how tightly crafted the rest of the film is (check out the timing of Hans’ glove removal) I wish they had taken just a little more time to bring out Kristoff’s knowledge of this world. That would have been (sorry, can’t help it) totally cool.

I spend as much time in my office as I possibly can--thinking up terrible things to do to people who don't exist.
View all posts by E. C. Ambrose →
This entry was posted in character development, essays, movies, worldbuilding and tagged character, Frozen, Frozen movie, ice, ice magic, ice palace, Kristoff, worldbuilding. Bookmark the permalink.

1 Response to Frozen: World-building on Ice