The Tower of London, built by William the Conqueror to dominate his new capital, has a long and fascinating history well worth reading up on. As I approached The Dark Apostle series, and especially the second book, Elisha Magus, it dominated my research for a time as well, but the scenes twist and turn, the plot grows and changes, and some of the scenes I envisioned for the book are no longer there, including one featuring the Traitors’ Gate. 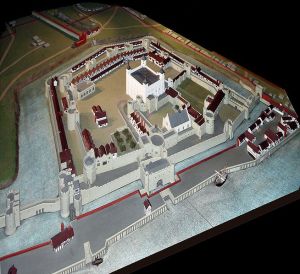 This model shows the Tower as it now stands, with the wharf extended down the river side, surrounding the rectangular St. Thomas’s Tower. 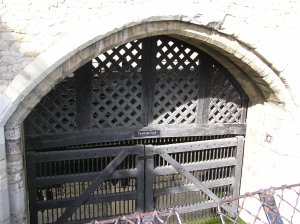 The Traitors’ Gate is a direct entrance from the river Thames into the the Tower grounds. This portcullis sits at the base of the large, rectangular St. Thomas’s Tower, and was built by Edward I in the 1290’s. St. Thomas’s Tower expanded the royal apartments, and provided a defensive bullwark at the riverside, as well as a protected basin for landing small boats on Tower business. Originally, St. Thomas’s Tower projected into the river, but by 1400, the Tower Wharf, which stuck out alongside the western end of the Tower by the city, had been extended the length of the river side to what is now Tower Bridge at the City Wall, thus completing the moat.

At some time, the water gate begins to be referred to as the Traitors’ Gate. I can date this usage to 1544, when the term appears on a panorama of London, drawn by Anthonis van den Wyngaerde (in the Sutherland Collection at the Ashmolean Library at Oxford). Likely, it was convenient to transport prisoners by barge along the river rather than bring them through the crowded city, especially for high-profile cases.

Perhaps, after the book is published, I can post my deleted scene(s) using the gate. Certainly, it’s murky and atmospheric enough to deserve notice, and the name alone inspires me.

I spend as much time in my office as I possibly can--thinking up terrible things to do to people who don't exist.
View all posts by E. C. Ambrose →
This entry was posted in Deleted scenes and settings, Elisha Magus, history, medieval, research, The Dark Apostle and tagged 14th century, Edward I, London history, medieval history, the Traitor's Gate, Tower of London, Traitors' Gate. Bookmark the permalink.