Medieval Apps: There’s a Saint for That!

One of the aspects of the medieval Church which causes much consternation among theologians is the presence of and reliance on the various saints. Theoretically, the Catholic Church is monotheistic, that is, it worships only one god. First, they muddy the waters with the Holy Trinity–a feature that started a lot of arguments and some interesting heresies in period with the question of what the flesh vs. god ratio was for Jesus, and whether the Holy Spirit took precedence over both Father and Son. It can be pretty complicated for the modern researcher to follow some of those arguments–yikes! 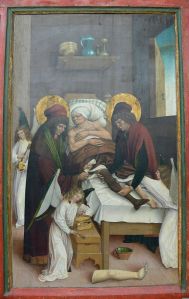 The saints seem a little more straightforward. Saints are, in essence, God’s posse, lead by Mary, providing intermediary services between sinners and the Big Guy. Generally person who showed signs of great religious devotion during life, or those who died as a result of their religious faith (martyrs), saints begin as ordinary people. This makes them seem accessible to the masses, especially when this new religion expands throughout the European continent and beyond in the early Middle Ages, when monotheism had a lot of competition from other religions which often featured an entire pantheon available for a variety of purposes.

So the idea of saints came quite naturally to the new believers, though the distinction between “worship,” which was reserved for God, and “veneration” which might be performed for a variety of holy figures was frequently lost. But, in reading some Church history, one gets the impression of bishops and other higher clergy running about trying to manage the increasingly unruly Cult of Saints. The process of attaining actual sainthood is complicated and lengthy–too long to satisfy local clergy confronted with miracle claims of their parishioners or with extremely devout behaviors on the part of some recently deceased person.

Saints, quite aside from their religious value, also meant profits–new chapels, expanded abbeys as people came to experience the sanctity of a local holy hero, giving gifts, needing services like meals and rooms, and perhaps dedicating children to service in the area.

The locals lobbied for their proclaimed saints to be granted official status, while the Church hierarchy struggled with the official process, managing investigations of alleged miracles and proliferation of local cults that often branched far from doctrine. Many of these local cults sprang up around the pagan centers of worship already in use, like sacred wells and trees, which might then be incorporated into a Catholic church–or might be roundly rejected by the more orthodox.

Some saints are associated with particular types of work very early on, while others are attributed to an area of patronage based on their own lives or martyrdom, including some who are co-opted for new purposes further down the road, like St. Roch, who is always depicted revealing a sore on his thigh, becoming the patron saint of plague victims after the advent of the Great Mortality (the Black Death, as we know it). Saints Cosmas and Damian, patrons of doctors, were famed for having transplanted a leg from one person to heal another–especially striking because the substitute limb is of a different skin tone.

Catholic online hosts a list of patron saints from Aloysius Gonzaga, patron of AIDS caregivers (and patients) to Francis of Assisi, appearing here as the patron saint of zoos. In between, you will find all manner of other saints, including two for marriage (one just for unhappy marriages!).

No matter your need, spiritual or secular, you’ll likely find there is a saint for that.

I spend as much time in my office as I possibly can--thinking up terrible things to do to people who don't exist.
View all posts by E. C. Ambrose →
This entry was posted in medieval, religion and tagged Catholic Church, church history, medieval, medieval history, medieval religion, patron saints, saints. Bookmark the permalink.

2 Responses to Medieval Apps: There’s a Saint for That!